Home → Parenting → Carlos Montefusco, the zootechnical engineer who one day began to draw: “What I enjoy the most is seeing how rural people feel represented in my works” 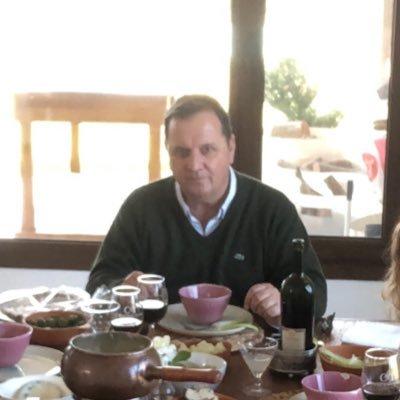 Carlos Montefusco, the zootechnical engineer who one day began to draw: “What I enjoy the most is seeing how rural people feel represented in my works”

Carlos Montefusco was born in the La Crucecita neighborhood of the city of Avellaneda and since 1997 he has lived on the outskirts of Tandil. He has spent a lifetime reading and researching passionately, self-taught and with the responsibility of a scientific basis, about our culture, our native and Creole origins, our identity. He has paid special attention to the prehistory of our national territory, especially the fauna and flora of the humid pampas, as well as the historical science of our nation.

As a zootechnical engineer, his life led him to capture that knowledge through his plastic art, as a painter and sculptor of manners. Some consider him a continuator of the work of Florencio Molina Campos. He exhibited his first pictorial work in 1993, and he has already made some 600 works of art for 30 years. Today his work is present in private collections and massively, in almanacs, books and magazines.

- Being of citizen origin, when did that passion for the countryside begin?

-To my father, in Italy after the Second World War, an uncle wrote to him from here, telling him: 'Come here, the land is so fertile that it can be pierced with your feet'. And he was left with a love for the land forever. My mother was from a family of Russian Cossacks whose life was linked to the countryside and horses. My paternal grandmother passed on to me the love for the garden and the chickens in the back of the house, so common in immigrant families. When I was a teenager, in Avellaneda, I began to escape by bicycle to the banks of the La Plata River, where the European farmers who produced vegetables and fruits, many vineyards and made patero wine were. There I met Don Valeriano, a countryman who came from La Pampa and told me about boleadoras, horses and pajonales that I did not know, generating a great attraction for the Creole culture. That river, with its limitless horizon, fascinated me and I got to see a gang of fishermen getting in on horseback with a net to remove tarpon and then load them into a Rastrojero. Many years later, as an artist, I found records of the sábalos being loaded onto carts pulled by oxen. All this inclined me to want to study a career that would allow me to work in the field.

-And how did you get to painting?

-My father was a technical draftsman and I began to imitate him as a child. Already in primary school I stood out for my ability to draw. So much so that in fourth grade I received an award from the newspaper La Nación. Then my mother sent me to take advertising drawing classes at a Pitman academy with Professor Jáuregui, who taught me the basic technique of drawing and color. I only did it for a year, because I had to do the 'colimba' and there they asked me to do caricatures, which came easily to me. When I returned I studied with the comedian Carlos Garaycochea. But I suspended my art studies to study zootechnical engineering at the Faculty of Agricultural Sciences in Lomas de Zamora. Today I regret not having continued studying art.

-The faculty must have been useful for something, anyway...

-During my college days I learned to ride a horse in the fields of my classmates. It was my first experience of the plain, with its great skies and wide horizons. Those two passions last me until today, when I have my horse 'Vazco', a waxed bay. I received my degree and went to work in some fields in the south of Córdoba. Later, I was an advisor to a group of farmers in the Saladillo district. They proposed me as a technician for INTA Rural Change. Starting in 1988, I was hired as a humorous cartoonist by Dinámica Rural magazine. I also participated in the magazine Chasque surero.

-And when was it that one race prevailed over the other?

-In that year, 1993, I met the renowned costumbrista plastic artist Gustavo Solari and I showed him my drawings. He liked them and invited me to exhibit with him and the painter Julián Althabe in a gallery in Tandil. It went very well with my paintings: I took 7 works and sold 5. And I said to myself: 'it's this way'. Until that moment I thought that I would always work as a zootechnician and an artist at the same time, but at that time my rural work was complicated by the floods of the '90s. Meanwhile, I got better and better at art and chose to be just an artist. From 1994 I exhibited in Buenos Aires until in 2006 I began to exhibit at the Arandú saddlery, with great success in both cases. In 2004 I had participated in an exhibition at the National Cowboy Museum, in Oklahoma, United States, and one of my works became part of the museum's heritage. Solari expanded my bibliographical knowledge. Thanks to him I began to value Marenco more and I fell in love with Molina Campos. I leaned towards caricature and noticed that with this humorous style I could reach everyone, especially children. In my style I chose to respect the anatomy of animals and in 2009 Range magazine invited me to the United States to attend a series of classes on horse sculpture and anatomy. After this I began to make sculptures in bronze.

.Afterwards your artistic life opened up like a fan…

-Yes, in 2015 the newspaper La Nación called me to illustrate Martín Fierro, which it published in installments for a year. It was very hard work. In 2016 my friend, Father Pablo González, suggested that I spread the work of Father Brochero in a book with texts and illustrations: “Brochero, herding souls to heaven.” I am a believer and I liked to spread it because it was and is a model of life. I tell you that the Hereford head that the Argentine Association of Breeders spreads as its isotype is my authorship and I am excited to see it on the cars. In 2017 Raúl Carman presented his book “Bichos de campo”, fully illustrated by me. I have shared some trips to the United States with my friends Pablo Lozano and Armando Deferrari, and it was wonderful how they received us there, as ambassadors of our culture.

-And what is this prehistoric fauna?

-Furthermore, I became interested in the prehistoric megafauna of the Pampas plains and began to practice the paleoart of recreating certain animals that inhabited during the Pleistocene -from 2.58 million years ago to 12,000 years ago- such as South American saber-toothed tigers , Bears of the plains and Mastodons. Then, by two prehistoric horses, the Hippidion and the Amerhippus, who lived in the last stage.

-Tell us about your audience and your family.

-I have lived in Tandil since 1997 with my wife and my two children. The pandemic prevented me from exhibiting and I want to do it again. My mornings are sacred and I dedicate them to my art. What I enjoy the most is seeing how rural people feel represented in my works, give me feedback, suggest themes, inspire me and invite me to their payments. Because you notice that I do it with respect. My greatest work of art is my family.

As a farewell, Montefusco invites us to watch one of four short videos in which I present some of his paintings and watercolors in animated form. The images are accompanied by an educational text written by him and told in his own voice: “Teritos”: